We all start somewhere.  All of what you see here and now on the Muskegon Channel, it began with a GoPro, free blog program and one sponsor who believed in what we were up to.  We were lucky enough to have a little more social media savvy than most, but they were truly the humblest of beginnings and ever since, we've done all we can to make sure that others looking to get started, launch a brand or show the rest of the community, or world what they got there was an affordable way to make it happen.  Yes, we gave away the farm for a little too long and as we grew had to think better financially for all of us, so the freebies had to kinda come to a stop, but we still work pretty hard to find an angle to help get the word out.  This is the case today.

We'd heard from S&T Expediting in Muskegon a couple times asking about advertising.  Like any start up, money is tight but they kept up the interest and we kept in touch.  Back around Christmas, the Salvation Army needed a hand picking up all the toys around town from the Toys for Tots campaign, S&T caught wind of that and volunteered.  They handled the job with gratuity in their hearts knowing that Christmas would still come for a lot of kids and it really didn't take much on their end.  Honestly, that scored some points.  :)  So, when Andy got the itch to get a pool table, and found one for $200 bucks on Facebook Marketplace, it was pretty clear he needed a hand moving it and maybe the job could get done and a new, local small business could help.

Called up S&T and asked if they'd consider a little trade.  We'd do an ad for them and they would help move the table.  Sure.  S&T seemed pretty excited about the chance and Andy...not having to lift heavy things....that's good.  Arrangements were made, an elbow bump was all that was needed and off we went on a Saturday morning to Sparta to pick up the pool table and bring it to Allendale until the time we can move it in to the new house.  The S&T crew was courteous, professional, adhered to all of our safety standards of the time and had the table out, moved and stored in under 2 hours.  Cost for a move like this?  Best estimate from owner Steve Modrow...about $300 bucks.  It would have been money well spent, even though it was more than the pool table itself.

We agreed to advertise, and with any of our sponsors, we do a little intro with them so you can get to know them too, so meet Steven Modrow of S&T Expediting of Muskegon.  S&T will move anything from a document to your entire house.  They are also in the market for corporate clients that need freight moved, parts shipped or just orders delivered.  The humble beginnings of a great new family run business are right here.  Take a listen

We always try to make a way to give any of our advertisers a little more.  It could have been a quick cash transaction, but S&T has shown by words and actions that they are really willing to work for it and that they want to get things going for the right reasons.  We'll invest in that.  We believe in that.  We are so thankful for the help moving and more over, thankful that Steve and his team wanted to buy from us before any idea was floated about a trade.  We'll trade heavily in your advantage Steve.  You took care of kids in Muskegon at Christmas.  You took the leap to make it on your own, just like we did a few years ago....and just like us back then....when others believed in us....we'll believe in you!  Need something moved?  Click on that photo below to visit their Facebook page or call 231-343-4089.  You can also connect with them on Twitter by using @ExpeditingT  Let's all rally around an upstart in Muskegon. 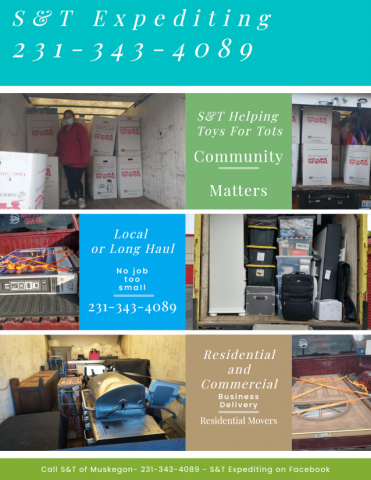 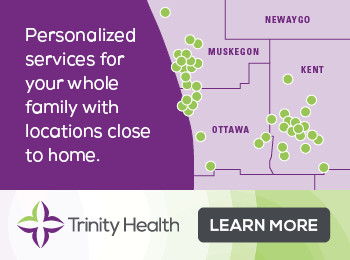